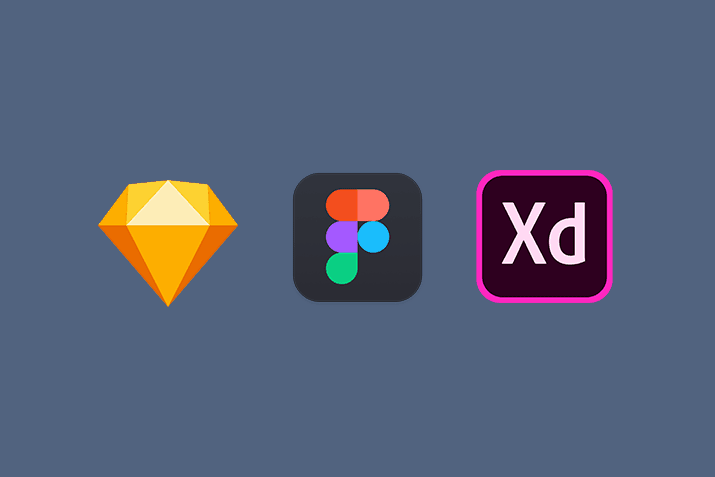 Sketch vs. Figma vs. Adobe XD

Sketch vs. Figma vs. Adobe XD: Which Design Tool Is Ideal for Newbies?

Every designer must eventually decide which design software they will use for the rest of their career. If you’re in the midst of finding your ideal design tool or attempting to replace one, this article is for you.

Sketch, which was previously one of the most flexible design applications on the market, has relinquished its crown to two new competitors, Figma and Adobe XD.

Adobe XD and Figma are two of the most popular UX design software available today. These applications, which were not only developed by industry leaders, provide some incredible features that have lured many users away from Sketch. Of course, Sketch is still one of the finest UX design tools available today.

It may be difficult to discover the appropriate tool for their job for beginning designers. We hope to provide a clear answer to this issue in this post, comparing Figma, Sketch, and Adobe XD. Let’s get started to this guide by web design Toronto team.

Why Use UX and UI Design Tools?

In some respects, every designer is a user experience (UX) designer. Whether you’re creating a website, logo, or even a social media post, you need to consider how your designs will be interpreted by users and how they’ll navigate through content. That’s essentially what UX design is all about.

All designers should have a specialized tool to create innovative designs with accurate user experience and user interface layouts. It makes a huge impact on how your entire design process and workflow go.

UX design tools like Sketch and Figma take this approach to the next level. Advanced capabilities of these tools allow you to live preview a website or mobile app interface after you’ve created it, allowing you to test actions and functions. This is a fantastic method to gain your customers’ confidence.

In conclusion, no matter what kind of designs you’re producing, you should become familiar with a UX design program to do a better job. And, more significantly, to make your designs easier to use.

Sketch has grown in popularity among designers ever since it was first released in 2010. It also won several accolades. Sketch is well-known as a user experience and user interface design tool, but designers are now using it for a variety of other applications, including drawing pictures and graphic design.

Sketch has a devoted following that is both helpful and responsive. There are several tools and add-ons available on the platform to help novices as well as experts.

Not long after the release of Sketch app, Fimap was founded. It took the firm a long time to get the application up to where it could compete with Sketch. Today, Figma is just as powerful as Sketch and serves as an excellent alternative for Windows users.

One of Figma’s most distinctive features is that it runs on the cloud, which distinguishes it from the competition. You may access the tool and your designs right away by going to your browser on any PC.

What is Adobe XD?

Adobe XD is a new competitor to both Sketch and Figma, having debuted in 2017 as an alternative to both. Adobe released the UX design program in 2017, surprising everyone by making it free to use.

Adobe XD is a design and prototyping tool that may be used by both professionals and amateurs. It also has features designed for team collaboration as the tool’s main selling point. The program is compatible with Windows and Mac operating systems.

With all of the formalities out of the way, we can finally get down to business. In this part, we examine the applications based on their capabilities and settings. Let’s see how well each program is made.

The tools that are included with UX and UI design applications are quite basic. Because the majority of the labour may be completed by simply dragging and dropping things from pre-made libraries, you can create the entire project using only a move tool and a type tool.

We didn’t expect much from any of the apps in terms of tools. They each offer all you’ll need for UX and UI design projects. Sketch, on the other hand, leads the pack with its vast toolkit.

Sketch includes a number of more sophisticated design-building capabilities. Drawing tools, in particular, are quite useful for hand-crafting certain elements of your designs, such as icons, buttons, and even drawing pictures.

The prototyping function of a UX design tool is perhaps the most essential component. The ability to generate realistic user interface designs as rapidly as possible is something to consider when shopping for design software.

Sketch is the greatest program for rapid prototyping. The artboards, in particular, make it very simple to construct a full app user interface in a matter of minutes.

In addition to Sketch, Figma and Adobe XD provide comparable features and capabilities to make prototyping quicker and easier. Adobe XD also has a feature called voice prototyping that allows you to generate prototypes for voice-enabled apps. Sketch, on the other hand, makes the overall process of prototyping much more pleasant.

The capacity to test your designs is one of the most interesting applications of UX design tools. This means you may actually create designs with interactive elements such as clickable buttons, useful forms, swipe motions, and other user interactions.

Thankfully, all three of these applications support interactions. Despite this, Figma and Adobe XD make it much easier to implement. Adobe XD even includes a feature that lets you add automatic interaction and movement to your designs.

You can also test your mobile app interfaces in a genuine mobile environment by using the mirroring apps provided by the software. iOS and Android mirroring applications are available from Figma and Adobe XD, respectively. Sketch has just one official iOS app.

Many apps excel in the area of pre-made element libraries. When it comes to mobile applications, web apps, or any other type of interface design, Sketch, Figma, or Adobe XD will not let you down.

All of them have huge libraries of frameworks, layouts, and even design components like buttons, forms, and other elements. Figma has a “design systems” feature that allows you to build elements with a defined design system. This actually boosts the whole rapid prototyping procedure significantly.

The Sketch app has the most and the best collection of tools and community help, making it the most popular. Sketch format includes hundreds of thousands of incredible pre-made templates, UI kits, software designs, and other resources.

There are a lot of tools available to download and install directly from Sketch. These plugins, as well as in-house extensions that extend the app’s functionality, make it possible for you to expand your capabilities with this program.

Both Framer X and Adobe XD offer plenty of templates, tutorials, and other tools. There are many plugins for Figma, but only a few are available for Adobe XD. Both apps are still in their early phases, so we may anticipate more in the future.

Adobe XD and Figma offer free accounts for individuals. Adobe XD has the most generous free plan, which allows you to prototype and create as many designs as you want. There’s also a shared document to collaborate on with two editors. 2GB of cloud storage is included in the package as well.

The free version of Figma offers you unlimited storage and the ability to open 3 active design projects at once, but only allows two active editors.

Sketch is a free online design program that lets you create professional-looking designs. Sketch costs $99 and has an unlimited number of uses. However, if you want continued software updates and cloud storage access, you’ll have to subscribe for a $79 yearly subscription.

Agile software, Fishbone, and Figma are all popular tools for team collaboration. Because the program is accessible to everyone with a laptop and a browser, it makes collaborating with others on different platforms much easier.

Adobe XD also provides several collaborative features. The Adobe XD CoEditing tool lets you and others collaborate on projects while enabling them to make updates in real time.

Sketch lags behind in terms of team collaboration. To collaborate with a team and with basic tools and options, you must subscribe to a monthly service.

In terms of performance and accessibility, FIMA is at the top. Despite the fact that the program is browser-based, it performs very well and the tools run considerably more quickly on low-end computers and laptops.

Fimware is also a cross-platform program. This implies you can use the software on any platform and even access it from any computer.

Adobe XD comes in second place. It’s compatible with both Windows and Mac OS computers. You’ll still need to download the program to your computer and create an Adobe account, however.

Sketch is only available on Mac computers. In some ways, Sketch runs better than Adobe XD and Figma.

Which Design Tool is Best for You?

Finding the appropriate app is dependent on the sort of work you do. Figma is an excellent choice for getting started as a UX designer if you’re a designer who works with various sorts of designs, ranging from website layouts to mobile UIs. The software isn’t only free, but it also runs directly in your browser without any installation or configuration necessary.

Adobe XD is also a wonderful tool for dipping your toes in the UX and UI pool. It’s especially useful if you already use Adobe Creative Cloud applications since Adobe XD integrates well with Photoshop and Illustrator.

Sketch is still the finest UX design program for Mac. However, because of its platform exclusivity, the program is difficult to recommend to everyone. Having said that, if you’re a Mac user, buying into Sketch isn’t a waste of money.