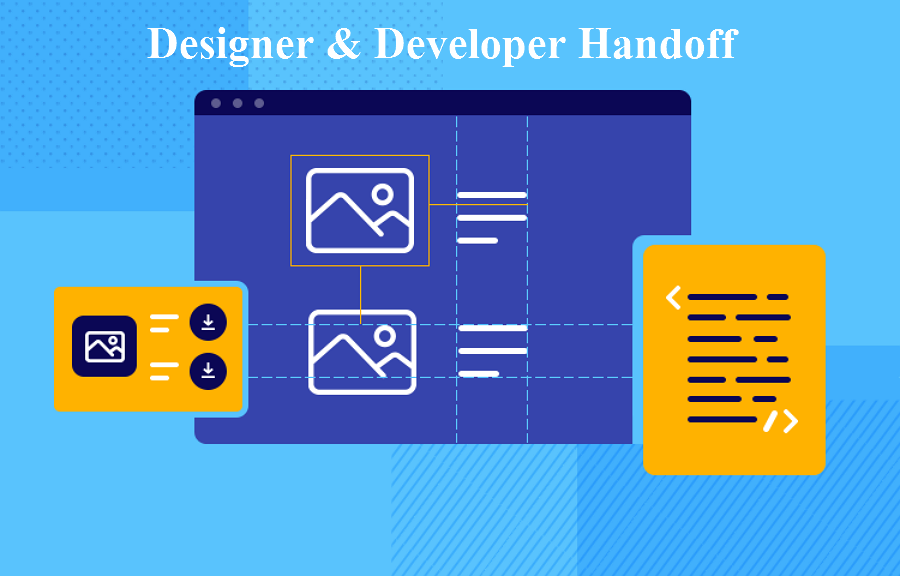 The 5 Most Useful Design Handoff Tools in 2021

Handing over a UI design to a developer who will code it up is referred to as design handoff. Handing over designs was previously a difficult, unpleasant, and frequently harmful procedure. Design handoff tools and/or features didn’t exist back then, so converting a design to code was known as “slicing a PSD.”

The developer was responsible for slicing a PSD (a Photoshop document), which was extremely frustrating since developers understandably didn’t want to deal with design tools. To make things clearer, designers would manually write design specs, but this still resulted in visual/functional inconsistencies and heated discussions with developers.

Handoff solutions now abound, with many tools dedicated to handoff and that assist designers and developers in transferring design to code, storing design files, maintaining consistency between elements, and enhancing designer-developer collaboration.

Modernized designers and developers view the design handoff process as an important stage in their development process, whether creating a design system or building a product from scratch. In reality, Figma is one of many UI design tools that provide handoff and design system features simultaneously.

What Do Design Handoff Tools Actually Do?

Developers are relegated to one option unless they receive design handoff: guessing. Guessing frequently results in visual and functional errors, such as the incorrect colors being used or interactions behaving strangely. As a result, this affects the user’s experience and causes designers to explode.

Let’s take a look at five of the most useful design handoff tools list by Web Design Toronto Team:

Figma does not support as many code languages as Zeplin, yet it translates design styles to CSS (for web), Swift (for iOS/macOS/iPadOS), and XML (for Android). This should be sufficient for most design handoffs, however.

For when designs need to be translated to Sass, Less, Stylus, React Native code, or other languages, alternative design handoff solutions can be downloaded as Figma Plugins. In any resolution and with complete or single image assets in SVG or PNG format, you may export or copy them all at once or one by one.

Collaborators can communicate clearly and openly about the design by using contextual comments, which aids collaboration and assures that everyone is in agreement on how the design should appear, feel, and function.

Figma is not only a design handoff software of choice, but also for user flows, user interface designs, interactive prototypes, design systems, and version control.

Zeplin supports additional programming languages (React Native, Sass, Less, Stylus, and others) in addition to the standard Swift, XML, and CSS. However, it is cheaper than Figma-style tools because they are multi-functional and cover a wider range of the UI design process. Zeplin is the most popular design handoff tool, and it’s very easy to use because all the developer needs is the design file exported as PNG or JPEG.

Zeplin is not popular among UI designers because it’s difficult to use, and most of them keep their design workflow contained to a single program. It’s easy to see why some designers would rather stick with Figma than use Zeplin for handoff since it’s more common than the latter.

Zeplin does a lot of what you would expect a handoff tool to accomplish (and does it quite well). It exports image assets as a variety of formats and resolutions, converts design styles to code, and promotes communication.

Inspect, InVision’s handoff tool for designs, which is accessible through Specs and Prototype (InVision’s design documentation tool and main web app), is one of InVision’s many design collaboration tools.

However, before handing your designs to developers, you’ll most likely be creating them in InVision Studio (InVision’s UI design tool). Studio is compatible with both Mac and Windows.

While InVision’s suite will set you back $7.95 per user per month, which appears to be a great bargain when compared to comparable solutions, the company has recently faced heavy criticism for overpaying on marketing for tools that haven’t quite met expectations. The major complaint is that InVision solutions are sometimes half-baked and disconnected, even though the company has taken a big step forward to improve its toolsets by purchasing assets from other companies.

Despite this, InVision is still the third most popular design tool, and it’s still a common tool overall. While it does appear to be declining with stiff competition eating away at its market share, it has been quiet recently (hopefully busy listening to customers so I wouldn’t write it off yet).

Inspect, created by InVision, is a cloud-based tool that helps designers and developers collaborate on the same code. Inspect can convert design styles to CSS, Less, Sass, SCSS, Stylus (Adobe), Swift/Objective-C (Apple), and XML (Android). If you’re used to working in the InVision web app, you’re going to have a hard time getting used to this handoff tool.

Adobe XD is a good option on this list, with no major drawbacks. Adobe XD, in fact, may be the greatest alternative for you if you’re already familiar with the Adobe ecosystem and have an Adobe Creative Cloud membership (in which case you’d have access to Adobe XD).

Figma does not require a subscription and is available without cost. If you don’t want to pay for it, $9.99/month is still an excellent deal since it provides the same features as Figma at a lower price. However, because we’re talking about design handoff, it’s worth noting that Adobe XD only translates styles to code, so there is no exporting for coding, meaning that if you want to hand your designs off to someone who can code, Figma is the only solution.

Overall, Adobe XD is a good option if you only need design handoff to CSS and/or if you’re already familiar with the Adobe ecosystem. In these two situations, paying extra for Figma may not be necessary.

Sketch is a free and open-source tool that’s comparable to Adobe XD and Figma. Sketch can simplify most of the UI design process, including handoff, as it’s another multi-functional design program with the ability to facilitate almost all of the UI design workflow. Unfortunately, despite support for CSS translation (like Adobe XD), Sketch does not support exporting for coding.

The disadvantage of Sketch is that it is only available for Mac users, although since design handoff works through a shareable URL, this shouldn’t be an issue for developers (but something to think about if your team has more than one).

Overall, Sketch isn’t the greatest, but it isn’t awful either. Because designers appreciate its user experience, it remains in the top five.

Given the design handoff tools on this list (ranked by number of users), it’s apparent that designers prefer to limit their UI design process to a single ecosystem — or, even better, a single tool (Zeplin is the only dedicated design handoff tool in the “top five,” with over 100 million users). Customers aren’t opposed to paying

Paying more for Figma, which covers the entire UI design workflow (design handoff included) not only within a single ecosystem but a single tool/interface, is certainly worth it.

On the one hand, while software development tools might help you minimize time-to-market and production risks, they come with their drawbacks. On the other hand, there are still advantages to using various tools for other types of handoffs. Finally, it’s worth testing out a couple of alternatives to determine what works best for you and the other stakeholders